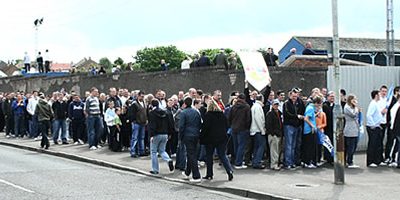 A representative from N.P.A. visited Jamieson Avenue on Monday to evaluate the traffic concerns raised last week on the Bo’ness Natters forum relating to Road Safety adjacent to Kinneil School south entrance.
The observer arrived at 0830hrs and at this point the school traffic was light. However, at 0835hrs a lorry arrived in the vicinity and, after discussions between the site management and the Crossing Patrol Lady, the lorry entered the site under supervision.
From 0840hrs through to 0900hrs the school traffic became incessant with cars parking consistently within the restricted zone as well as on the pavement.
The most alarming incident was when a taxi approached Kinneil School from the west, mounted the pavement before the school gate, and proceeded along the pavement. The observer then had a conversation with the Crossing Patrol Lady regarding these observations.
Jamieson Avenue was again monitored between 1440hrs and 1500hrs and numerous cars were seen parking on the pavement and within the restricted zone area.
At the commencement of the Newtown Park works, a Traffic Management Plan was put in place which restricted site traffic between 0830hrs to 0900hrs. and 1500hrs to 1530hrs. The Site Manager has been reminded of the plan and made aware that, even though there was no school traffic at 0835hrs on this particular morning, it was not acceptable for this traffic movement to take place and it must not happen again.
N.P.A. will continue to monitor the situation on a regular basis and will seek further comments from the Crossing Patrol Lady.