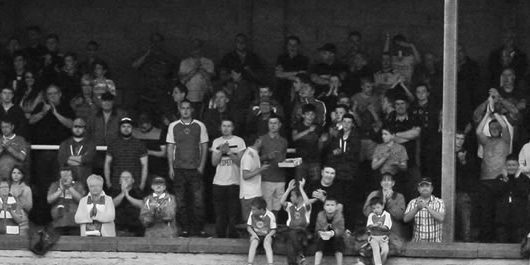 Into the game and it started a cagey affair with both teams having play in and around the midfield area but no real chances created. The home side enjoyed a bit of pressure when a free kick was hit towards the box by Scott Gibb from the half way line. Stuart Hunter rose well to meet it but couldn’t find a BU player with the header down. Another opportunity came when Will Snowdon done well down the left and crosses the ball in, unfortunately just too high for anyone to get on the end of.
It wasn’t long before another chance arose this time Andy Shirra stood over a free kick out on the left towards the edge of the box. The delivery was good but the away keeper was alert and assured to come off his line and hold the ball well on the 6 yard line. The home side still tried to put pressure on the visitors with Marty Wright doing well on the right to get a cross over which was cleared as far as Shirra who played the ball accurately wide to Snowdon who then crossed only to see it cleared again.
The ball was fired quickly back into the box, but in the end went narrowly wide of the visiting keepers far post. The home side played the ball forward yet again this time starting in midfield with good link up between Devon Jacobs and Shirra and a ball out wide to Ryan Miller. In came the cross but again the visiting Forfar keeper was alert smothering the ball to clear the danger.
The home side however remained on the front foot this time Shirra done well collecting the ball and finding a burst of pace through the midfield, He played a through ball towards Miller on the edge of the box but the visiting defence were alert and knocked the ball out for a throw in. Approaching half time the BU got a free kick outside the box in the centre of goal.  Snowdon struck the ball but saw it go wide of the left hand post. The pressure was continually put on afterwards from the home side with Wright having a chance to shoot but saw it go begging.
Overall the home side looked the better team but again for all the possession there was little to show for it regards chances on goal. The final efforts of the first half came when the visitors got a corner and Andy Murphy in the BU goal done well to come out and collect. Wright got through on goal for the home side but his shot went well over the bar when possibly it could and should have been on target.
HT Bo’ness United 0 Forfar West End 0

Into the second half and the home side got on the front foot straight away this time rather than just possession leading to nothing, Hunter done well and Campbell was on hand to put the ball in the net for 1-0 BU. The first sub for the BU came when Scott Sally replaced Wright.
For all the passion the BU had the creativity and cutting edge seemed to be lacking yet again. And the visitors fired a warning when a free kick was well delivered and had to be defended for a corner. More of the same continued with the Home side still having a lot of the ball but still no cutting edge or chances on goal. Shirra down well beating his man and getting a cross in but it was an easy take for the visiting keeper coming off his line to collect.
Sally then done well on the right and played a cross onto the head of Shirra but his headed effort was easily saved yet again. And another chance came and went with what looked to be a goal and should have been a goal but yet again the final effort on goal wasn’t up to much.
The home side appealed for a penalty as yet again the ball made it into the box and over went Calum Scott but the appeals were waved away by the referee. Forward again came the BU with Snowdon doing well to beat a couple of defenders only for the attempted cross to be blocked. Gibb produced a good throw for the right to find his man in the box but no shot even got away as a poor first touch allowed an easy clearance.
Then good play from Scott in the midfield saw a forward pass find Miller on the left of the box yet again no end product was produced as the ball trickled away to safety. Shirra again done well playing a good pass from the middle of the park wide to Michael Gemmell who passed it back towards Shirra but again the move broke down. Another change for the BU saw Jack Wilson replace Miller.
A move forward from the visitors saw the referee award a penalty. Thankfully for the watching BU support the ball went high and wide over the bar.
The final sub was made for the BU when Scott was replaced by Ryan Batchelor. Finally deep into stoppage time the referee blew the final whistle and a good three points for the one side. Yet again however it has to be said that the amount of possession should be giving us more convincing wins but at the end of the day a win is a win and three valued points are welcome for the BU.