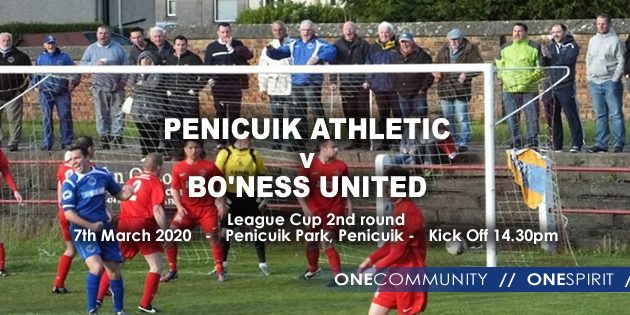 Another milestone was reached this afternoon when Will Snowdon reached his 400th appearance for the BU and still gives that 100% effort and helps the younger players out.

The first chance of the match with some pressure from the home side and a shot that crashed off the crossbar.  This kept up as the BU defence failed to get out and a corner after eleven minutes.  A corner from Baptie swung in and Paul Tansey got on the end of it to give the hosts an early lead.

United tried to hit back almost immediately when a Kieran Anderson corner was clear with the keeper watching it all the way and had to get his hand to it and clear the danger.

Anderson swung another corner in and Stuart Hunter rose and his header was cleared.

An earlier change for the BU in the first half and Kyle Turnbull had to come off after a hard challenge and Ryan Stevenson took over.

Almost on the interval, Ritchie was through and although he was first to the ball the home keeper took him out and what should have been a penalty amazingly the referee awarded a bye kick to the protest of the BU faithful as they all got behind the team.

The BU came out and tried to take the match to the hosts but an early effort from Penicuik man Jones saw his effort head over the bar.  Then for the BU came dangerman Anderson who gave the crossbar a good shake and from the rebound, Ryan Stevenson scored but was ruled out with linesman holding his flag up to the annoyance of the BU bench and fans.

Moments later and the BU were all square and none other than Snowdon was the man to score it,  he met the ball sweetly and cracked in the equaliser.  A great way to mark your 400th appearance.

Anderson was at it again passing a few players before losing out in the home box when a pass might have been the best option a few seconds earlier.

Ross Campbell was having a good game and with another good clearance conceding the corner.  Bo’ness went on to take over the midfield for a period but that final touch just wasn’t happening until a loud appeal went for a handball but the man in the middle decided to play on and the home side broke with the BU to busy shouting for a penalty and Devon Jacobs cleared the danger.

Extra time and not the sudden death penalty shoot-out accustomed in the Juniors.

Honours were even until Campbell who was having a great match was adjusted to have pulled the jersey of the home player and a penalty was awarded this time. Then the ref went to his pocket and pulled out the red card and Campbell was dismissed.  From the resulting penalty, Penicuik took the lead through Craig Stevenson almost at the end of the first period of ET.

The midfield on both sides were holding the front guys up as not much was happening.  As the final minutes approached the BU went all out for it and with the visitors nearly all up field Penicuik had a chance to wrap up the match but the ball went narrowly wide.

Chris Donnelly had a great chance late on and as he passed the ball through the flag went up for offside.  A nightmare schoolboy error at the back saw Snowdon and Murphy both going for the same ball and Lumbert Kateleza had an easy chance and took it well rounding off the match.

Bo’ness will play Penicuik again in three weeks and a strange time as it will be 12.15 on a Sunday.  Also with a string of league matches now every point will be needed as the teams playing catch up could still get on the coattails of the Newtown Park men.