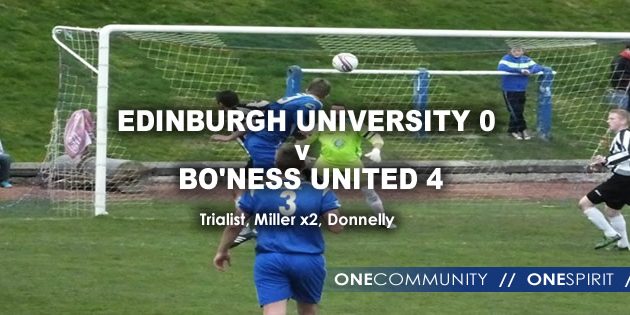 BO’NESS keep up the 100% record in the Scottish Lowland League.  The fairytale start to life in the seniors and the fans can’t wait for the return to watching the BU and Max handing out the orders.  Three games have gone and the team starting to gel well and losing the only goal in the first match against Cumbernauld Colts

Back to this afternoon and a rather dull start until the home side crashed the ball off the crossbar.  This was a warning to the BU and replied with a goal right on half time when our trialist put one in the net as the referee was ready to blow for half time.

Into the second half and Zander Miller came on for Kyle Bell but we don’t know if it was a knock or a tactical switch.  It soon paid off as Miller netted to make it 2-0 in his first match of the season making Stevie Hislop saying, “The Goals Don’t Move”

Then came Chris Donnelly to open his account for the season and won’t come any easier than this one.

Back to Newtown next week and we will entertain Caledonian Braves in a 3pm kick off.  We don’t know if the match will be televised or not but if it is, we will bring more details on where to get it.