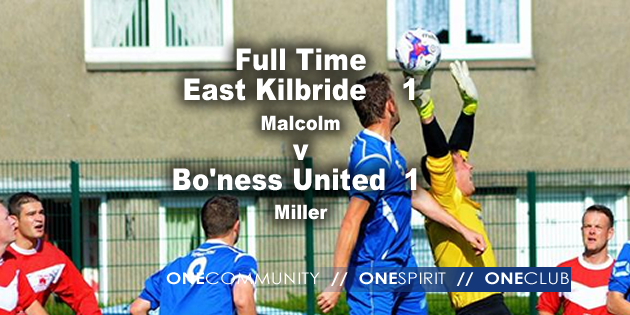 Zander Miller opened the scoring early in 7 minutes when he latched on to a good ball tucking it away.

A scare for the BU when Zander Miller had to come off after a knock and hope it is not long term as he is just back.

BO’NESS travelled to East Kilbride full of confidence even although the defence was depleted either through injury and suspension. Two loans have arrived from Pollok and the defenders both started today Danny MacKenzie and Bryan Wharton. Back came Craig Comrie and teenager Craig Meikle who was quoted as the first goal scorer if you believe that.

The home side were out the traps quick but Erskine couldn’t get the contact he wanted in the first minute.
Zander Miller continued to flourish in front of goal and put the BU one up when he collected a through ball and found the corner of the net with only seven minutes on the clock.
East Kilbride got themselves back into the game five minutes later when Erskine and Wilkie worked well cutting open the BU defence but the resulting shot was turned round the post by Andy Murphy.
Following on from this Meikle was replaced by Stuart MacFarlane after picking up a knock. As if the defence wasn’t weak enough that was another out of action as Max Christie wondered just when the defence would be back together as he planned.
Wilkie was in action again as Armstrong found him in the centre of the box and Murphy was good again to make the save.  The BU rear guard had all hands at the pumps with the keeper having to be alert again saving from the home side on a few occasions when the defence was still trying to work around the new faces and read the game they played.
Half an hour on the clock and danger man Miller done well to find Tom Grant who just went inches wide with his effort.
Shortly afterwards it was all level as Malcolm gets a second bite and fires into the BU net and a few minutes later the ref blew for half time and how quickly did that go by?

After the restart Malcolm is proving to be a handful and as he tries to lob Murphy his effort was just the wrong side of the post.
United were playing the possession game and looking for the break to get behind the home defence which just wasn’t happening for the BU.  Matters only got worse as talisman Miller picked up an injury and had to go off being replaced by Brian Ritchie.
On the hour East Kilbride made a move replacing Wilkie for Healy. And the match was soon to become a midfield battle as the sides looked for that spark to break the wall but it wasn’t really happening today and it finished a draw.
Both sides will be happy that they still hold the undefeated league start and head to the Challenge Cup next week with the BU at home to Burntisland Shipyard and East Kilbride head up to St Anthonys.