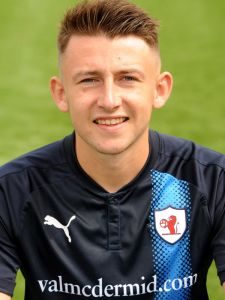 Ryan Stevenson who scored the penalty

Bo’ness headed to Dalkeith in the final league match of the 18/19 season. With it comes a place in next seasons East of Scotland Football League Premier Division Also Bo’ness and Max Christie with another league win making it ten in a row.

United started as they have done before settling in to their own rhythm. After ten minutes Allan MacKenzie made the home keeper work and enough on it to save the home side.

Bo’ness were playing well and it paid off just after twenty minutes when an attempted clearance was delivered in to the net and an own goal setting the game up now. Dalkeith 0 Bo’ness 1.

Within minutes a hand ball from the Dalkeith defender and was shown a red card what the ref must have seen it as a goal scoring chance. From this a penalty and up stepped Ryan Stevenson and made it look easy for Dalkeith 0 Bo’ness 2

Heading up to half time the BU had the pressure on but nothing to really make the home keeper work as a defender almost made it three but the bar saved the blushes.

Dalkeith came out the blocks and trying to get back in the match but a strong BU defence could have soaked up all day.

Then a midfield passing game from both sides until the breakthrough again for the BU and an Allan McKenzie cross found Fraser Keast and he done what he does well and as a former player Stevie Hyslop had the saying “The goals don’t move” as he calmly made it three. Dalkeith 0 Bo’ness 3

With the game getting near the end home side Dalkeith tried their best but substitute Craig Comrie made it four and full time.

Bo’ness are back in action midweek and visit Tranent in the cup quarter final.  The last time we made a trip here we went down 5-0.  And after the whistle and later that night Tranent manager left and headed to Newtown bringing his backroom staff as well.

But the funny thing about this fixture, it as been named The Sandwich Gate after some sandwiches apparently going a stray last week.