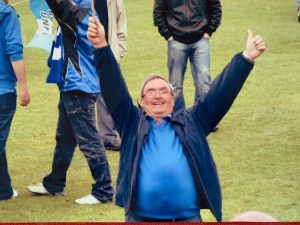 A fast start was expected as both sides were after an early goal. The goal wasn’t coming and neither was a shot target. Thirty-five minutes had clocked up quick and Andy Murphy was watching for an attempt from Broxburn but the drive high over the stick,

The opening goal came three minutes later when a corner came in and landed in the net. Who scored I don’t know but fans near the goal saying it was an OG while the home fans were claiming it was Ronnie Alexander. The referee notebook will have to settle.
With only five or six minutes remaining Broxburn sat back and looked like they were taking this lead in at half time.

The second half started like the first with both sides on the attack. Bo’ness started to try a passing game until it was intercepted by former BU youngster Zander Miller but experienced central defender Stuart Hunter picked up a yellow for stopping Miller in his tracks.
Max Christie made a double change taking off Will Snowdon and Chris Donnelly. On came Fraser Keast and Mark McKenzie who was making his debut after arriving from Crossgates. Tom Grant was also making his first appearance in the blue and white.

Murphy was on top form again after the first half howler and saved from Miller.

Bo’ness thought they were on level terms when Stuart Hunter put the ball in the back off the net only to see a raised flag for offside.
This offside made the BU stronger and on the hour mark and a cross found Ryan Stevenson who made up for Hunter and scored his first goal in the Premier League for himself and the BU first as well.

Broxburn started to pile on the pressure and Murphy again saving the day for the BU. This was followed up with Hunter following Miller and managed to beat him and headed clear.

From this, each side had a chance on goal but nobody on hand to net the winner