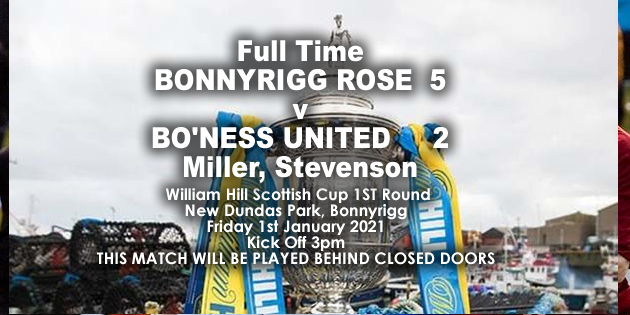 William Hill Scottish Cup 1st Round and a well-awaited tie after numerous postponements.  This morning a pitch inspection was carried out at 10am at the home of Spartans where the fixture was to be scheduled.  The match was postponed again and everyone was now waiting on the rescheduled match only to be informed by a Bonnyrigg fan the game was being played at New Dundas Park at 3pm.  Just as well the fans were not allowed out the front door or this could have been plenty of questions to be answered.

On to the match and Bonnyrigg could have been in front in the opening minute all for a brilliant save by Andy Murphy. The Rose were streaks ahead of the BU and it was only a matter of time before that breakthrough would come.  All to often when you see your side miss chance after chance you get hit by the sucker punch and that was to happen as the BU forward Zander Miller was on the end of a good cross one up for Bo’ness just after the half-hour.

It brought the match to short term boiling point and within a minute Devon Jacobs was cautioned for a reckless tackle.  In the next couple of minutes, Bonnyrigg pair Mark Weir found his name in the book for dissent and this was quickly followed by Scott Gray for a deliberate trip.

Time for all the calmdown as the half time whistle sounded and Bo’ness had one foot on the bus to Dens Park next week.

The second period got underway and after two minutes George Hunter was on goal and the match was all square. Just 10 minutes later and the BU found themselves behind when conceding a penalty which was tucked away by Lee Currie.

Just three minutes after the penalty calamity again and the referee point to the spot again and up stepped Currie again to bag his second and a Rose third.

This time with under five minutes since the penalty you would think it was an NFL game as another penalty and again Currie was up for a hattrick of penalties.  Wonder if this will be some record in the Scottish Cup or any match for that matter.

with fifteen minutes remaining up popped Hunter again for the Rose and from one down at the interval were now five one up and on their way to Dens Park next week to play Dundee.

Nicky Locke found his name in the book for a trip and this was followed by a flurry of changes from both benches and the BU and Chris Donnelly replacing Jacobs and Will Snowdon replaced Ross Campbell.

Almost on full time a consolation for the BU when Ryan Stevenson finished off a Donnelly cross. Bonnyrigg 5 Bo’ness 2 and night and day on goals but could have been a different score had the ref gave Bo’ness a penalty for a handball before the Rose had their first.  As we know football is a funny thing when your winning but your not a happy chappie when your on the wrong end of the score.  All the best to Bonnyrigg in the next round.

Max Christie will have to look over what happened today and try to address this before we meet Bonnyrigg again at Newtown on Monday at 3pm.on Lowland League duty.