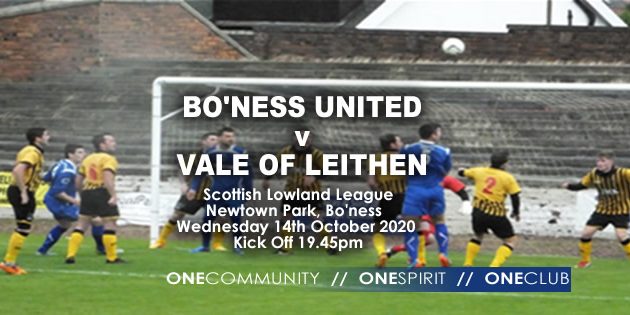 BO’NESS started the season well with a great win against Cumbernauld Colts at home. With the questions being asked if this season would actually happen. This Covid-19 has caused havoc across the country and is now in the full second wave.
A great opportunity by Fanbase to televise these games that are played behind closed doors. So, we will wonder if the fans will ever be allowed back on the terracing. To log on for the home and away fixtures the Fanbase website will have the links for you to purchase a live match for a fiver sitting in your own home and home hospitality with the baffies on sounds good for those with the internet but some of the older guys still use the smoke signals to send messages.
After the win at the weekend this midweek fixture would be a challenge with the Scotland match on at the same time and on a couple of wins the support is turning back to watch the Internationals with a bit of belief. According to figures over 100 had logged in to watch the BU and they were not to be let down.
The first half was mostly eyeing each other up with little to report on in front of the goal, so hopefully the second period would warm the fans up.
Half Time 0-0

Early moves at the start of the second period, a crack was split and Ross Campbell was upfront to the BU one up. It didn’t finish at that as new boy Nicky Locke opened his account to put the distance between the BU and the Vale.
Unlike Saturday when the home side went to sleep after the second allowing Cumbernauld to get back into it. The match was soon to be almost over as the BU went three up through Locke with his second. It looked a better performance and seemed to gel better as the match progressed.
Another new start Kyle Bell rounded off the scoring for a good home win winning 4-0.
Hopefully this weekend we can see a side working together and hoping to keep up the winning performances. Before this, the defence will have to be on the ball and a clean sheet will be a bonus. The Uni had a hard start to the campaign heading to Kelty Hearts who were not promoted as Champions. And a 4-0 defeat would be incurred.
Next up was a home tie against East Stirling and suffer a 2-0 defeat. Sitting at the bottom of the league having lost to these two will be hoping to not make it three defeats, but the BU will be eager to match the three but that will be in wins