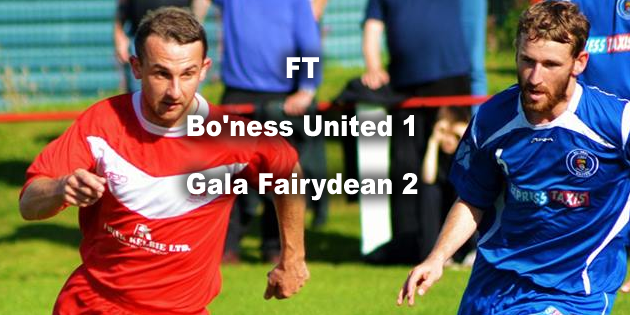 Bo’ness went into this rather wet weekend with the benefit of the Newtown artificial turf and not a waterlogged playing field and a few matches fell to the weather. The thought of Gala Fairydean who sat a point above the BU were a side along with the rest of the teams above our favourites had failed to win against.

Both sides opened quickly and trying to get the early goal and Andy Murphy had the better of saves to make.

Zander Miller showed his ability on goal with a header on target and put the BU one up after Gala were showing the better play before the build up to the BU goal. Miller got on the end of a Nicky Locke ball.

Bo’ness were looking to add to their advantage in the second period with a few half chances on the Gala goal.  The visitors rocked the home side as an equaliser.  Marc Berry found the net and this now gave Gala a second wind.

The heads of the BU were stunned by the goal and Gala took control of the match and a good goal from Scott Taylor-MacKenzie with just under ten minutes to go and held off for a good three points at Newtown.