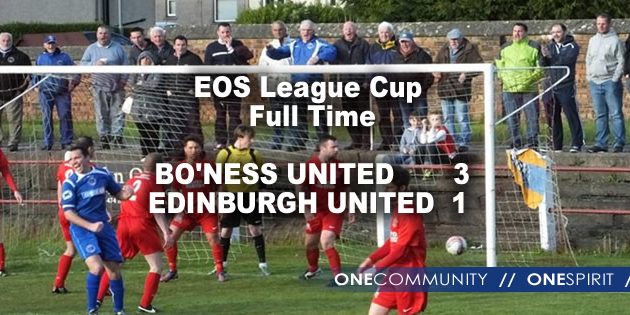 Bo’ness had the pleasure of kicking off shooting towards the Linlithgow Road end and a light wind and wet surface to help.

Edinburgh opened up on full attack as they put the BU defence to work but the defending done its job well keeping the visitors at bay and Ryan Adamson playing in goal had a touch of the ball with a couple of distance efforts.

As the BU went on the move won a good penalty with the ref calling it correct and Brian Ritchie put the home side in front.

The visitors kicked off but were still clouded by the penalty and the BU were soon two up when a cracking shot was saved and only managed to punch it straight into the path of Kieran Anderson with an easy goal.

Soon after the BU’s who were in control and didn’t let up and Craig Comrie had an effort bounce off the crossbar.
Approaching the half time whistle the BU were playing well and Edinburgh wondering how they were three down and a mountain to climb in the second half.

Edinburgh started the comeback fifteen minutes into the half and could be the goal of the match from around 25 yards that cracked the underside of the bar and into the net.

As Bo’ness started to get back in control seen a few chances going a miss that could have opened up the three-goal lead again.
Edinburgh were now having the best part off the match as they attacked the home goal.
The BU were looking like the tank was about empty as they allowed the visitors to play and gifting them a few chances which will be annoying Max Christie as in other matches they have either sat back or the opponents turned on the juice.
The home side then came back to life and a few near misses and from this, they held on to the 3-1 win and now face a trip to Penicuik in the next round in a couple of weeks’ time.
FT: BO’NESS 3 EDINBURGH 1