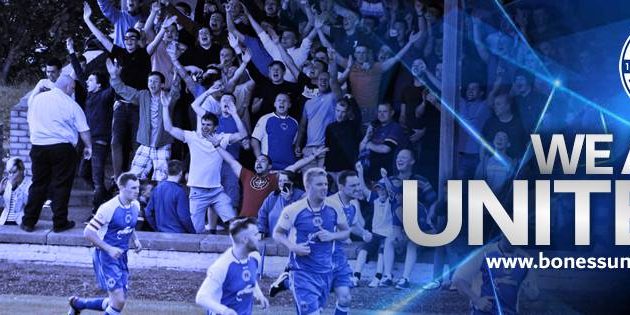 Bo’ness were first to have an attempt and the visiting keeper had a routine save as the BU pressed but couldn’t find that window.
The home side were trying with the wind behind them it was Fraser Keast turn on goal but the keeper was sharp to get there first.
Talking point of the first half came with almost twenty minutes in when a strong push in the back and shouts from all around for a penalty but the only one who never seen it must have been the ref as he waved play on.
Dunbar took to the home side as they still vented from the penalty claim saw Andy Murphy having to gather the ball as the defence couldn’t get it away.
Brian Morgan was on target through the Dunbar bus in front of him but again never put the keeper under any threat.
Bo’ness should have opened the scoring after half an hour when Ryan Stevenson was sent clear with only the keeper to beat and is exactly where the ball went from a shot. Straight at the goalie.

Stevenson and Craig Comrie had chances which came to nothing.

The Newtown Park side had enough chances at the start of the second period to have been out of sight.
Dunbar can thank their keeper as he had a couple of crosses to deal with from free-kicks but the Dunbar bus was working still.
Max Christie thought it was time to change the line-up when he made all three substitutions. On came Kieran Anderson, Mark MacKenzie & Brian Ritchie and off went Fraser Keast, Stevenson and Morgan made way.
Comrie was to be denied again when a powerful shot straight at the keeper.
Brian Ritchie was starting to cause problems straight away and the goalkeeper denied him as well.
As time ticked down it was looking like a draw but with the BU still attacking the Dunbar bus came to do a job and they got it one point and the BU dropping two as they were looking for a home win.

League Cup next week at Penicuik