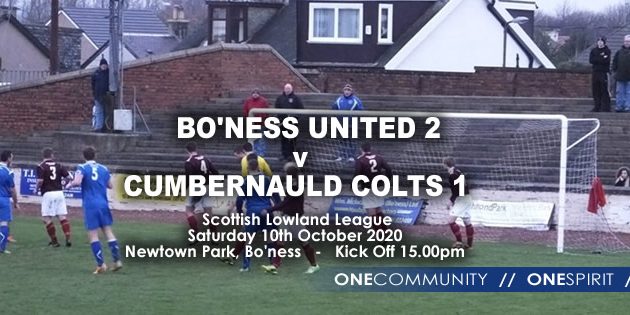 BO’NESS UNITED started life in the fifth division of Scottish Football with hardly a soul in Newtown Park due to the Coronavirus-19 pandemic.  The Country has never seen anything like it,

The match was streamed live on the internet,  The last match streamed live was away back when Bo’ness beat Neilston in the quarter-final of the Junior Cup.

The first half was goalless and when a free-kick from Kieran Anderson was deflected off the wall and left the visiting keeper Jonathan Grier helpless and rooted to the spot to send the home side one up.

Not long afterward the lead was doubled when Tom Grant opened up his first of the season.

The Colts pulled one back with around ten minutes remaining Cammy Foy brought visitors back from the brink but the BU held on to start with a good win.

On Wednesday the BU are at home again this time in a rearranged match which was down for Innerleithen on Tuesday but will now be at Newtown with a 7.45 pm kick-off..