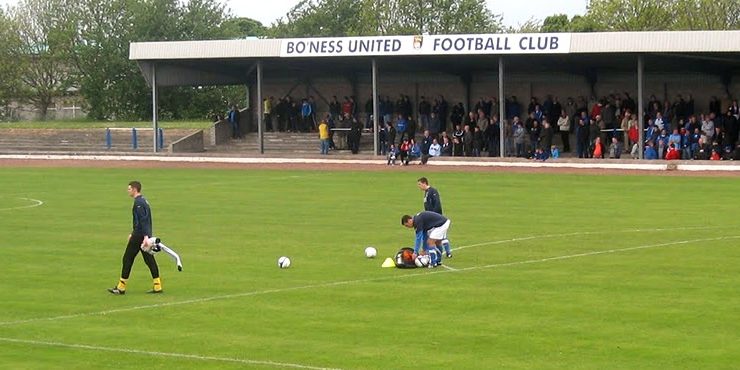 Match Report East Region Superleague Bonnyrigg Rose v Bo’ness United Saturday 19/08/2017 KO 14:30 (Fixture originally at home but switched to away by Bo’ness for reasons we all know so let’s get on and talk about the football)

The game started with the visitors looking lively and a brilliant ball into the box saw Fraser Keast head over the bar from what was a great opportunity to take an early lead. Bonnyrigg then got a free kick on the far right but it came to nothing as the cross missed everyone in the box.
It wasn’t long though before the home side were on the attack again and this time the ball into the box was on to a head and the ball landed in the visitors net. Bonnyrigg 1 – 0 BU.
A good ball into the box could have had the visitors back on level terms but it missed everyone attacking it and went out for a goal kick. The next attack again came for the visitors but the cross was easily cleared and played out to the home sides number 3 who was enjoying plenty space down the left hand side but no real threat thankfully came from it.
Then the visitors were aggrieved when a free kick should have been awarded but wasn’t given closely followed by the home side getting a free kick that never was and a bit of disruption evolved when the wrong player was initially booked which then resulted in several bookings that could have been avoided for Connor McGregor, Will Snowdon &  Keast. Had the correct foul been given in the first place none of this would have happened.
Anyways on with the game and the visitors were still playing well trying to get forward encouraged by the large travelling support. Shouts for fouls and handballs that were justified from the visiting team & support were waved away. The fans encouraged the BU players to let it go as they still complained about decisions and the complaints were justified however it wasn’t helping the BU in the long run to get back into the game. Yet another foul was waved away shortly followed by the referee giving a decision on the edge of the box to the home side. Before the free kick was taken Hassan Nyang had to receive treatment. The ball then made it into the box and was soon in the net as the home side went 2-0 up. Half time against the run of play to an extent HT: Bonnyrigg 2 – 0 BU.

Into the second half and the visiting support who were fantastic as always still shouted the BU on and a good move started by Rico Quitongo found Calum Scott who turned inside and a shot from outside the box that came back off the bar.The visitors broke forward and yet another yellow card for the BU was shown to Nyang for a foul on the right of the box. The ball came in from the free kick and was well defended for a throw in. Two,subs saw Quitongo & Sally replaced by Marc Kelly & Jack Wilson but soon the visitors were in trouble with the home side breaking into the box and as a player hit the deck the referee pointed to the spot. The penalty was easily converted Bonnyrigg 3 – 0 BU.
A third sub saw Jordan Cropley replace Michael Gemmell. The next chance came for the visitors with a free kick on the edge of the box which was struck well but the home keeper was down to his left to make the save. Another chance came for the visitors with a shot from outside the box deflected for a corner.
The cross in was cleared for another corner which led to a goal kick. As time ticked away the visiting support still encouraged the BU forward but the home side managed to break away up the park with the ball. The home side had another chance cleared just inside the box as injury time commenced. And a final push up the park from the visitors resulted in the flag going up on the far side. The referee blew for time FT: Bonnyrigg 3 – 0 BU.