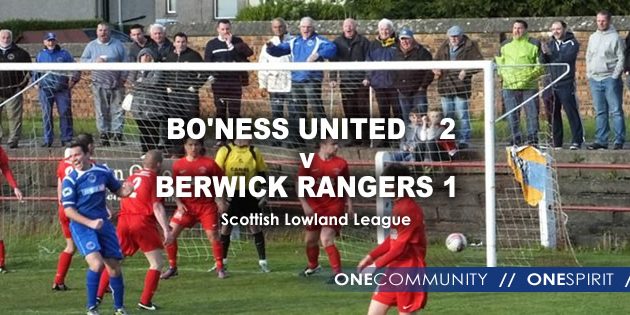 BO’NESS welcomed Berwick Rangers to Newtown Park in what would be one of the most difficult of ties so far and it didn’t disappoint especially without the support this season.

The visitors opened up pushing forward and a couple of half chances which were blocked.  United earned a free kick and Tom Grant had a good chance. Shortly afterwards and Devon Jacobs was now treading thin ice after being cautioned just after ten minutes.

Almost on twenty and Chris Donnelly goes down but the referee waved play on.  Shortly after this Bo’ness had a penalty and in the resulting foul Berwick keeper Ali Foster suffered a head injury and couldn’t continue. Ryan Stevenson stepped up to the spot after five minutes after the injured keeper was replaced and the BU were soon one up.

Rangers finished the half strongly and old BU forward Calum Smith and Lewis Allan tried to get an equaliser.

Disturbing news during the break that Foster had been taken to hospital on a precautionary trip due to the head injury.

Andy Murphy did well to collect from a corner after some pressure at the BU end.  Almost on the hour Nicky Locke had a good chance which was saved by the new keeper but within the minutes the home side went two up when Kieran Anderson. Locke could have finished it off from the restart as a good effort in the box

Berwick made a sub bringing on Dan Purves who could have turned the game on its head pulling one back within five minutes of coming on.

Anderson almost added to his tally in the closing minutes which also saw Smith and Michael Gemmell going in the notebook as the two veterans had a customary look at each other.