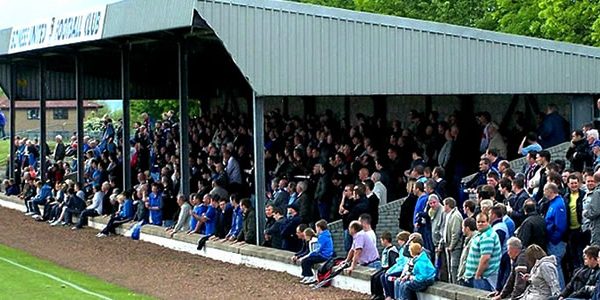 “VIEW FROM THE TERRACE”

The visitors started the brighter and best of the two sides with a great through ball finding Marty Wright who scuffed his shot and made it easy for the home keeper. Bo’ness continued pressing however and Fraser Keast cut in brilliantly from the right and if only he had seen the advancing Ross Philp could have cut the ball back but instead took on the shot from a tight angle and the ball trickled past the far post. Then what had happened in previous games haunted us again with a quick break up the park from the home side staring with a long ball. The ball made its way into the box and a gaping hole in the BU defence left a simple tap in for 1-0 Camelon.
Things soon got worse for the BU when Ross Campbell with a bit of a high boot but no malice intended brought down a Camelon player in the middle of the park, the referee reached for his pocket and produced a straight red. Not so sure it was as it looked worse than it was, however Campbell had been booked and it was at least a yellow so was going off anyway no matter what card was produced.
This didn’t seem to dampen the Bo’ness spirits but did frustrate a little and Will Snowdon soon followed into the refs book. Things still looked positive for the visitors as again we pressed forward and won a corner. The ball was cleared but another chance soon followed with what looked a good pass from Ruari MacLennan on the left as he tried to link up with Philp. It was just slightly over hit and the ball went out for a goal kick. Just after the half hour though things got better again as a good ball in found Wright who made no mistake smashing it home from close range to level the game at 1-1.
A couple of corners followed as the BU still tried to push on and the only danger for us came from a quick break away by the home side that was well defended. It looked like the BU were getting ahead when Robert Sloan swung in a fantastic ball and Wright got on the end of it however the home keeper produced a brilliant save to clear the danger under pressure. On the whole for an end of season game the 1st half wasn’t bad and the visitors definatly had the better of it.
Half time Camelon 1 Bo’ness 1

Into the 2nd half and it was unbelievable, Bo’ness were right on the front foot and Roddy MacLennan produced a contender for goal of the season with a sensational strike to make it 2-1 BU. And straight after Marty Wright was on hand to head home for 3-1 BU. A sub followed when Roddy went off for Colin Strickland. Roddy took a knock so hopefully he will be ok and the sub was just a precaution.
The ball was constantly in the home sides penalty area with the BU coming close to making it four. Marty Wright soon looked like he had his hat trick with a great shot from just inside the box but the home keeper got down low to his right to make a good save. It was all one way traffic with Bo’ness playing brilliant football and the only threat came with a shot blasted over the bar and a simple cross easily cleared. Marty Wright then got what he was looking for as he cut in from the left and even though there was Bo’ness players queuing up for a tap in he had one thing in mind and shot towards goal from a tight angle burying the ball low into the far corner to make it 4-1.
The Bo’ness keeper Andy Murphy then saw his first action of the game as he had to take a long ball out of the air. From the kick out the ball was returned but Stuart Hunter headed away well however immediately after was feeling his hamstring. Eldin Al Zubaidi was called to warm up but wasn’t required as Hunter played on looking to be fine. The game was still being spent in the home sides half with chances being created regularly and Bo’ness playing brilliantly.
As the clock run down into the last 15 mins the home fans were drifting out the exits having seen enough. Bo’ness made another sub when hat trick man Wright went off to rapturous applause from the travelling support and Callum Smith came on. Shortly after the final sub came when Ross Tierney replaced Keast. Callum Smith looked bright and was almost on the end of a cross but BU didn’t have to wait long for another goal as the referee pointed to the penalty spot. Substitute Coco Strickland stepped up and made no mistake low into the corner.
From the kick off the only time Camelon got near the BU box and won a free kick however it was ballooned over the bar and with that the referee blew for time and brought to an end a memorable game and a brilliant performance. Full time Camelon 1 Bo’ness 5.

Next up for the BU is a home league match against Penicuik this Saturday 14:30 kick off.
BJC