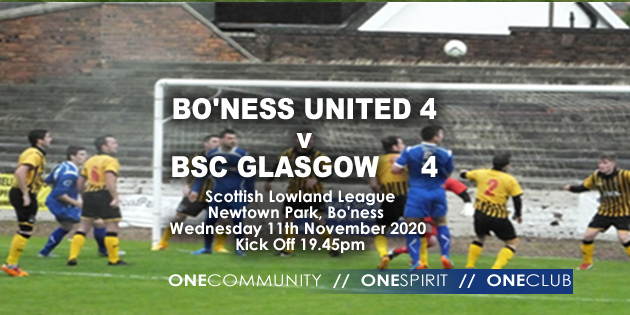 Playing against another unbeaten side in this Lowland League fixture and those who saw it witnessed a classic encounter against Alla based BSC Glasgow.  BSC are no strangers to play the BU as they clashed in a cup fixture while playing out of Cameloan when Newtown was being upgraded by The Newtown Park Association.

Both sides opened up and throwing 100% to get the early goal. As the home forward sent the ball over the bar in the opening shots as the visitors almost scored immediately but for Andy Murphy in the BU goal.

Midway through the half and the opening goal came from the visitors as Jamie Glasgow scored via the post.

Five minutes after the opener the visitors with a pass back chased down by Zander Miller and the ref had no doubt keeper David Wilson had stopped an attempt on goal and was red-carded for the foul.  While the quick substitution of Mills who was replaced by the sub keeper.  His first touch of the ball was picking it out the net as Ryan Stevenson scored the resulting penalty.

Right on half time BSC regained the lead when Glasgow netted his second.

Bo’ness were on the attack two minutes after the restart and it was Zander Miller on the end of a Stevenson cross to get the equiliser.

United could have been in front but for a couple of good clearances kept them at bay. A fast break away from the visitors and into the lead with Darren Christie on the end of a good ball from Glasgow. This shows the lowland league side can get up the other end in no time, a move that had only a couple of touches.

A couple of minutes later and Christie could have made it four but Ross Campbell was on hand to clear the shot. The BU elected to take the match to the ten man visitors and sent on Kyle Bell for Will Snowdon.

Midway through the second half and Miller notched his second and the BU back level.

Fifteen minutes remaining and Miller turns the match was turned on its head as the BU forward knocked in his hattrick after a deflected shot. just two minutes later he could have made it five but for Barr preventing him from scoring with a wonderful save.

Jamie McCormack got up to head in a corner from Hughes to make it all tied again. Shortly after the BU were reduced to ten when Campbell picked up a second yellow taking one for the team as Glasgow was hauled down.

A strong penalty claim for the visitors was not forthcoming and still believing for the winner attacking the BU defence which were now camped up around the BU goal but fortunately for them no more goals in the match and a hard earned point for both sides,