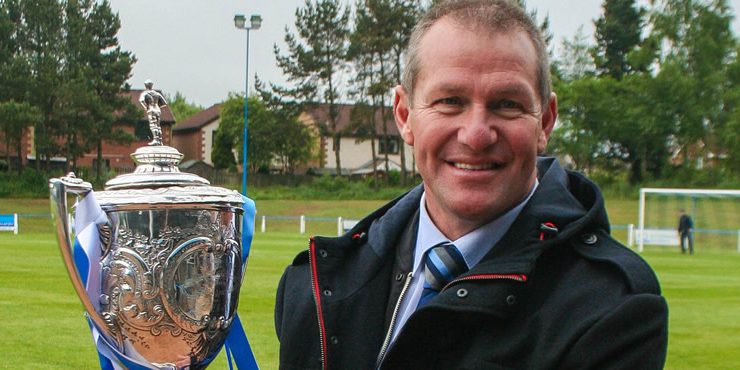 The Juniors Info caught up with United Gaffer Allan McGonigal this week to talk about his playing career, before taking up management.

Be sure to check out the Juniors Info site

Who did you play for?
My debut was with Stenhousemuir as a sixteen year old and then I went onto play with Falkirk, East Stirling, Meadowbank, Cowdenbeath and East fife. I then went junior with Linlithgow Rose and Camelon.

Can you remember your junior debut?
I scored on my debut and we won 3-1. I can’t recall who it was we played though.

Did you always want to be a striker?
I think so, I wasn’t the paciest player but I was good with my back to goals, had a good first touch and was two footed. I was also good at linking the play.

Who was your main influence?
Kenny Dalglish was definitely my hero, so I used to enjoy watching him and I admired his style of play.

What were your three greatest achievement when playing?
Winning the Scottish Junior Cup with Camelon Juniors where I had a great time, playing with Falkirk was another one. My final one would be when I played with Meadowbank and scored a hat trick against Hamilton in a 5-1 victory who had Danny McGrain, Willie Jamieson and Alan Ferguson playing.
There was only two of us in the dressing room before the game as the team bus had broken down so we went right onto the park with no preparation. We were a goal down inside five minutes but hammered them.

Biggest disappointment?
The second junior final against Tayport where George Fairley kept faith with two or three players including myself and we lost in extra time which was heart breaking.

Best player you played with?
I played with some cracking players. Probably Kevin McAllister, Alan Irvine who went to Liverpool, Stevie Maskrey and Paul Hunter too.

Toughest opponent?
Kenny Brannigan was a tough centre half, he liked to leave his studs down the back of your calf. He was as hard as nails.

Best goal you scored?
Probably in the hat trick against Hamilton. It was from the edge of the box the ball came out to me and I hit it left footed first time into the top corner. It doesn’t get much better than that.

Most important goal?
The year we won the junior cup I scored in every round other than the final. I actually scored 33 that year. The most important goal was probably against Dundee North End in that Scottish run. We had drawn against them in the first leg so we needed the win. I scored an absolute rasper with my left foot and we went on to victory. I’ve scored a lot of important goals over the years though.

Main attributes?
My ability to play with my back to goal and brings others into the play. Being two footed was a great asset too.

Favourite ground?
As a striker I have to say any ground in which I scored. I think though it would be Rugby Park as I always did well there and the facilities at the time were very good.

Best ground played in?
That would definitely be Hampden Park.

How many honours did you win?
I’m not sure. At senior level I won the Fife Cup with Cowdenbeath, The Stirlingshire Cup with East Stirling, I won a couple of tournaments with Falkirk. At junior level I won every single honour that was on offer.

What age were you when you retired?
I was thirty two which was relatively young. I had the opportunity to go and work with George Fairley as his assistant where he let me do all the coaching so it was an easy decision. I did play a bit part during the season but I was never going to be fit enough to carry on.

Any regrets?
Possibly I gave it up a year or two early but to be fair I had a fantastic time and thoroughly enjoyed my playing career.

Do today’s strikers get more protection than what you did in your day?
I would think so. In my day you could tackle from behind. It’s all for the better today though in my opinion. Saying that, there are as many bad injuries today as there was in my era. You always knew what was coming back in my day so you were ready to jump out the way whereas now a bad tackle from behind isn’t necessarily expected.

What managers got the best out of you?
There was three and I would have liked to have linked all their abilities into one. Billy Lamont was a tough man who trained us hard. Alex Totten for his enthusiasm and spirit. Terry Christie for his tactical knowledge. A combination of the three would be the perfect manager.

Who was your best strike partner?
Stevie Maskrey, Roddy Grant, Alan Irvine, Kevin McAllister, Ally Mitchell, I had a few. It was a standing joke that every club I went to my strike partner got a move and I stayed. I don’t know if that was a good thing or a bad thing. I used to tell them it was because I did all the work.

Since you retired what has changed in the game?
Positively?
I think in the juniors the parks are so much better which is important for the standard of the game. It’s great to see clubs working on this. Having linesman is a massive help too. We can’t do without officials and I know I criticise them at times but I acknowledge and appreciate the tough job that they do
Negatives?
Not really, football is what it is. We all play it because we love it. Sometimes when you lose it ruins your Saturday night but what would we do without it.

Any ideas how many goals you actually scored in your career?
I don’t actually know. I would have scored well over 150 in the juniors. Senior wise I’m not sure as it’s just something I didn’t keep a record of.